Garifuna Communities in Honduras Celebrate their Arrival to Indura!

On April 12, 1796 a group of Garifuna people where marooned on the Island of Roatan. They Brits ousted them from the island of St. Vincent in the Grenadines, in the Eastern Caribbean. The Garifuna are a unique culture that merges South American / Caribbean cultures with Western African elements. Back in the first half of the 17th Century, around 1635, a group of natives from West Africa arrived in St. Vincent.  History says that they had been captured to be sold as slaves in America and the Caribbean Islands. The ship they were on ran aground and many survived and escaped to the island. There, they mingled with the local Arawak and Carib natives. Thus, a new ethnic group came to be. Today, we know them as Garifuna or Garinagu.[themify_hr border_width=”1″ width=”1″ color=”light-gray”] 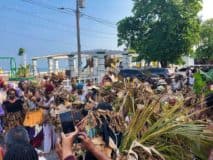 For a century and a half, they lived peacefully next to the French colonists in St. Vincent. But they became a thorn in the shoe for the Brits when these tried to take over St. Vincent. As such the Brits rounded them up, shipped them to Roatan and marooned them there. They first arrived in Roatan in the vicinity of Punta Gorda 223 years ago today. Back in those days, the Bay Islands of Honduras were disputed between Spain and Britain. Before the arrival of this first Garifuna community to Honduras, the islands were basically uninhabited. The Spaniards saw their arrival as an attempt by the Brits to establish a community in Roatan. To counter the effort, they invited the Garifuna to the Caribbean Coast on Honduras. Most of them took them up on the offer.[themify_hr border_width=”1″ width=”1″ color=”light-gray”]

You can Visit Garifuna Communities in Honduras!

The Garifuna Culture is so unique, that UNESCO declared the Garifuna language, dance and music to be a Masterpiece of the Oral and Intangible Heritage of Humanity in 2001. By todays estimate, there are about 300,000 Garifuna people living in Honduras. The vast majority are in the Caribbean Coast, in the departments of Cortes, Atlantida and Colon. Fortunately, there are efforts to preserve their language and culture. It can be a lot of fun to visit a Garifuna community in Honduras during the celebration to their patron saints. Most Garifuna people profess the Catholic Religion. As such, each town has a patron saint.[themify_hr border_width=”1″ width=”1″ color=”light-gray”]

Today, I had the chance to watch a small parade of Garifuna people in La Ceiba. They were celebrating their arrival to Indura (Garifuna for Honduras). They were wearing their traditional colorful dresses and chanting their typical Garifuna music. Of course, the drums are an important part of any musical celebration for the Garinagu people. When they dance to their music, they gyrate their hips to dance punta music.

Garifuna Culture is an Integral Part of Honduras’ National Heritage

There is no doubt that the Garifuna Communities in Honduras are an important part of the local heritage. To this day, many still speak their own language and retain their ancestral traditions. If you are visiting La Ceiba, you can make a trip to the Garifuna communities or Corozal and Sambo Creek. Ir you are in Tela, you can visit the communities of Tornabe, San Juan, La Ensenada or Triunfo de la Cruz. In the vicinity of Trujillo, Santa Fe, Guadalupe and Cristales are the closest Garifuna communities.[themify_hr border_width=”1″ width=”1″ color=”light-gray”]