Roatan is a small island.  Yet because it is long, you almost need a car if you want to explore the island. This is especially true if you want to see the “real” Roatan in the East End of the island. Thus, the question is how do you go about getting a Car Rental in Roatan?

For starters, some of the larger international franchise rent a car companies have an office in Roatan. You will also find some of the larger companies in the country here. Thus getting a car rental in Roatan is easy! Or is it really? Last week I was in Roatan and needed a car to get around the island. The best deal I found was through a local Honduran company that has good cars: Econo Rent a Car. I called in, made a reservation and had a car ready for me at the airport when I landed there.[themify_hr border_width=”1″ width=”1″ color=”light-gray”]

Problems began as soon as I got to the booth to register. They asked for my driver’s license and my card. I produced both. They had no problem with my Mexican driver’s license, but they did with my card. You see, I have chosen not to have a credit card. I use a debit card, and it turns out that Rent a Car companies in Honduras do not like debit cards.

It turns out that when you rent a car, they will but some of your funds on hold. About $1200 US to be exact. This means that they take that amount from your account as a precautionary act, just in case you wreck the car. To get that money back in your account you will need a letter from the car rental company releasing it. Once you have it, plan on spending time at your bank demanding they release your funds back into your account.

So, If I decide to accept this charge on my debit card, getting a rent a car that was to cost me $76 dollars for two days requires almost 1300 dollars worth funds to do so! This sounds preposterous, but it gets better. When you request insurance, just in case someone runs into the car while you are driving it, you agree with a $1,200 US deductable. In other words, in most cases, it will be cheaper for you to fix the car than to pay de deductable! 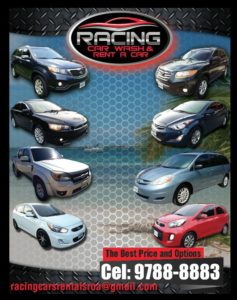 But getting back to my story, they told me at the booth that they could not give me a car. The clerk at the desk noticed that I was getting upset and offered to help me with another company that has a car rental in Roatan. The company is Racing Car Wash and Car Rental. He put me in touch with them and a gentleman by the name of Jaime Alvarenga offered a car for $45 US per day. Although the rate was a bit more expensive, there was no red tape deposit to deal with. We agreed on the terms and he was at the airport within 10 minutes with a sparkling clean vehicle.[themify_hr border_width=”1″ width=”1″ color=”light-gray”]

While the car was not new, it was in good shape. I took it, paid him for the rental on the spot and went on my way. I must note however, that the car did not have any fuel. Thus, my first stop was at a gas station to insure that I could go on my way. The car took me from the airport to the West End and then all the way to the East End of the Island. I put on almost 100 miles on the odometer while I took care of business on Roatan Island.

When I was ready to leave the island, I called Jaime Alvarenga, the owner. I told him that I was on my way from Roatan o Utila on the Utila Dream. On the spot he agreed to go to the ferry terminal to take delivery of the car. No frills, no extra charges for having the car delivered at the airport and dropped off at the ferry terminal. The next time I go to Roatan, I am not calling one of the large rental companies to get a car. I am convinced that the best rent a car in Roatan is Racing Car Wash and Car Rental! I hope this tip is worth your time and saves you time and money next time you are in Roatan and need to rent a car to get around the island.