Why would we need a travel update for the San Pedro Sula to La Ceiba route? Everyone knows that Hedman Alas, the leading bus company in Honduras has that route covered! Heck they even have an office within the Port of La Ceiba facilities to provide service to their customers that are arriving to La Ceiba via ferry and need to continue by highway towards San Pedro Sula. From there they connect via the company hub in San Pedro Sula to Copan Ruinas, Tegucigalpa and Guatemala City. Furthermore, it is also well known that Viana, the second-best transportation company in Honduras has service between La Ceiba and San Pedro Sula with connections towards Tegucigalpa.[themify_hr color=”light-gray” width=”1″ border_width=”1″] 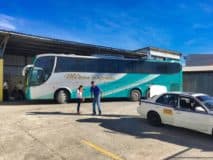 Well, you see, both companies have temporarily suspended their service to La Ceiba. Although they are expected to soon re open the routes, if you are arriving in San Pedro Sula and need to travel to La Ceiba, you will find both companies have discontinued this route. This is the  purpose of this Travel Update. There are several options available, and it is best that you know of them before hand so that you incorporate them to your travel plans. First and above all, there are still many bus companies offering the route. Probably your best alternative is Transportes Cristina. They have several daily departures and most of their buses have a functioning air conditioning system. However, they do frequent stops along the highway to pick up or drop off passengers in route. This translates into a longer travel time.[themify_hr color=”light-gray” width=”1″ border_width=”1″]

Take a Short Flight Between These Two Cities!

If you are traveling to and from the airport, then you will need to negotiate a taxi once you arrive at the San Pedro Sula Metropolitan bus Terminal. There is of course the option to fly between both airports. Aerolineas Sosa provides one daily flight between both cities. An early morning departure from San Pedro Sula guarantees you will arrive in time for your connecting flight. The drawback is that the air fare is not cheap. And then you will probably have several hours to hang out at the airport waiting for your flight. The return flight from San Pedro Sula to La Ceiba departs at 2:30 pm, so it allows you to land in San Pedro Sula, clear immigration and check into Sosa Airlines Counter.[themify_hr color=”light-gray” width=”1″ border_width=”1″]

Another option is to hire a local taxi from the San Pedro Sula airport to bring you to La Ceiba. The price of the transfer should be around 140 to 150 USA dollars. Steep if it is only one or two of you, but reasonable is you are part of a group.

Finally, Roneey Shuttle is operating a route between La Ceiba to San Pedro Sula. The schedule from La Ceiba is meant to allow passengers arriving from the islands to catch their service. You can book and prepay your ticket on line, so that is convenient. Their meeting point is at Wendy´s Hamburger restaurant at Mega Plaza Mall in La Ceiba and will drop you off either at the airport or the San Pedro Sula Bus Terminal. They depart Wendy´s at 9:30 and arrive at San Pedro Sula Airport at around 12:30 PM.. The return trip departs from the airport towards La Ceiba at 1:00 PM.[themify_hr color=”light-gray” width=”1″ border_width=”1″]

We hope that Hedman Alas and Viana will reopen their route very soon. In the meantime, I do hope that you find this info useful to travel between both cities. We will provide a continuous travel update.

« The Plaza San Martin Hotel District in Tegucigalpa» Honduras has a New Minister of Tourism!